Owning a gun is an enormous responsibility. One way to show that you are a responsible gun owner is to keep a gun safe at home.  Aside from keeping your gun away from other people especially your kids, a gun safe can protect your precious investments. We all know that guns aren’t exactly cheap, so it only makes sense to install a gun safe where you can store your weapons.

The following are good reasons to install a gun safe at home: 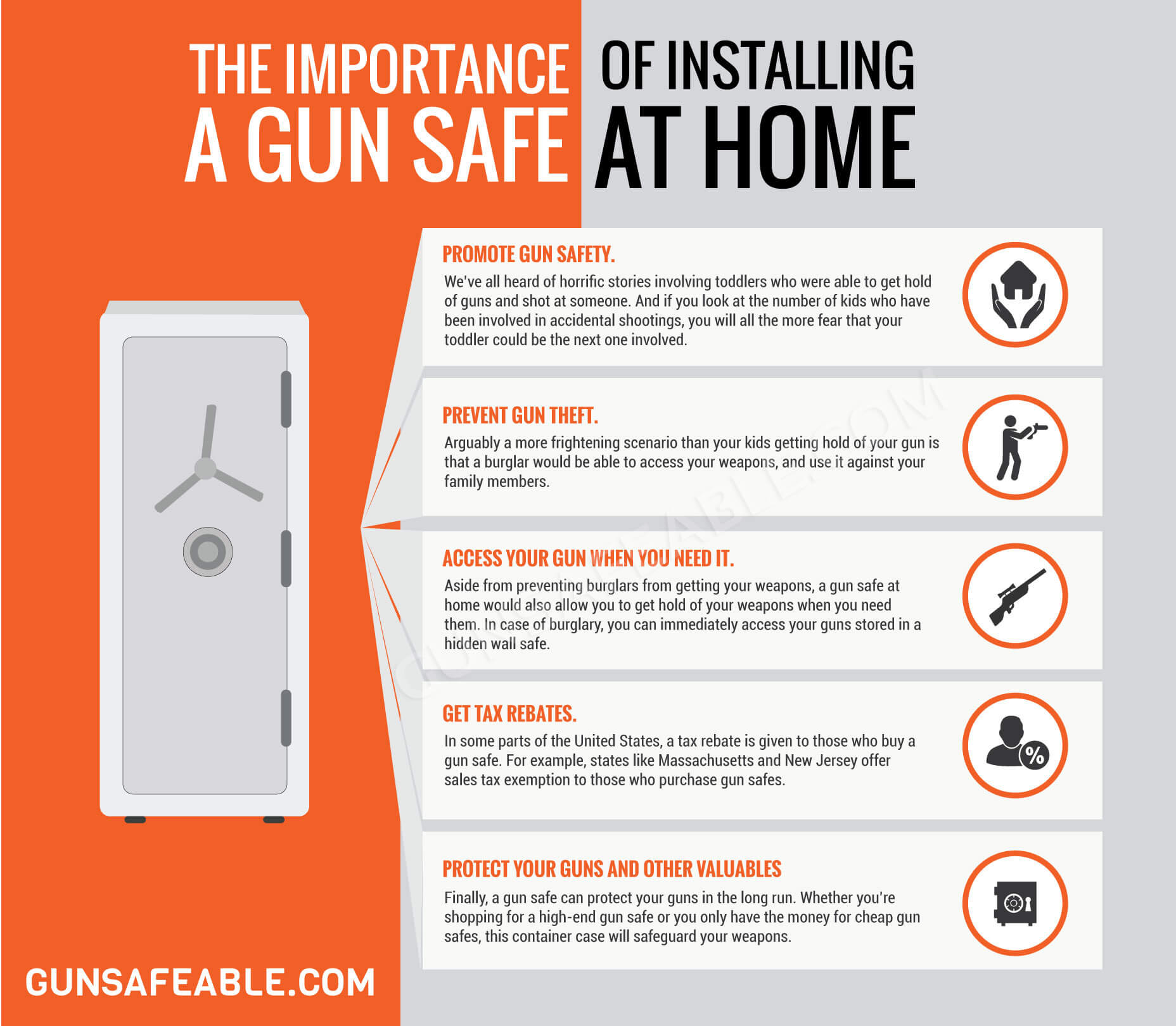 To put this graphic on your website, just highlight, copy and paste the HTML code below:

We’ve all heard of horrific stories involving toddlers who were able to get hold of guns and shot at someone.  And if you look at the number of kids who have been involved in accidental shootings, you will all the more fear that your toddler could be the next one involved.

According to a Washington Post report, there have been 23 instances of toddler shootings in the United States during the first four months of 2016. In fact, toddlers have shot more people in the country than Muslim terrorists.

And if you think that it just a coincidence, then think again. Last year, the same publication reported that there were 59 cases of toddler-related shootings in the country. That basically means a toddler would be involved in a shooting accident every week.

And we know that when toddlers get hold of guns, unfortunate things can happen. A toddler may take aim at his sibling, resulting to fatalities. In 2015, 75 percent of children who were killed with guns were under the age of 12. According to an NBC News report, children are more likely to die from guns which were hold by family members.

These alarming statics underline the need to invest in the best gun safe at home, as you don’t want your children to be part of those numbers.

Arguably a more frightening scenario than your kids getting hold of your gun is that a burglar would be able to access your weapons, and use it against your family members.

There’s no updated US date on gun thefts, but the US Department of Justice reported that there were 1.4 million firearms stolen across the country from 2005 to 2010. And at least 80 percent of those weapons were never recovered.

By having a gun safe at home,  the chances of a burglar getting your weapons would be drastically reduced, if not completely eliminated.  If you invest in the best biometric gun safe available, then even the most experienced burglars won’t be able to open it.

Aside from preventing burglars from getting your weapons, a gun safe at home would also allow you to get hold of your weapons when you need them. In case of burglary, you can immediately access your guns stored in a hidden wall safe. This advantage could spell the difference between life and death.

Moreover, the best home safe would be able to store fingerprints of your other family members like your spouse.  Thus even if you are away from the gun safe, anyone in your family can get hold of your weapon to repel an attack in your home.

In some parts of the United States, a tax rebate is given to those who buy a gun safe.  For example, states like Massachusetts and New Jersey offer sales tax exemption to those who purchase gun safes. There are also cities that offer incentives for gun owners who install a gun safe at home. There is also a pending bill in Congress for federal tax credit for gun safe buyers.

5. Protect your guns and other valuables

Finally, a gun safe can protect your guns in the long run. Whether you’re shopping for a high-end gun safe or you only have the money for cheap gun safes, this container case will safeguard your weapons.

It can also serve as storage for other valuables like knives, magazines, gold, silver, and even important documents.

As you can see, there are a lot of benefits of having a gun safe at home. From keeping your guns out of your children’s reach, to protecting your weapons and other valuable, there are plenty of reasons why you should have one installed in your abode.