I have been alarmed by news of the rising number of children who have accidentally shot themselves or someone else in the country. If I remember it correctly, there were around 265 children who picked up a gun at home and shot someone by an incident.

With two young boys in the house, I had to keep my weapons out of their reach.  I shopped for cheap gun safes but was told I should prioritize security over price.

Then I found the Shot Lock Solo vault 1911 safe, and I was impressed right away with its features and reasonable price tag. 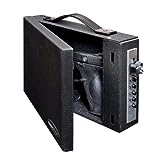 Whom is This Product Designed for?

The Shot Lock 1911 would make for a great car gun safe for any gun owner.  It is small and compact, able to fit in car seats very easily. It is also an ideal gun safe for gun owners who are always on the go because it is handy.

The Shot Lock 1911 measures 11 x 7 x 2 inches (length, width, and depth). It is so compact that I can place it under my car seat. I can also put it in my backpack and not really worry about getting my back strained because it only weight 7.5 pounds.

There’s also a built-in handle that makes the carrying of this safe very easy. From a far, it looks like a briefcase until you see the buttons and main knob on the side.

The best gun safe is one that can’t be easily opened even by the most skilled or clever burglars. I can say that this safe is secure thanks to its 14 gauge steel construction.

I read online that a good gun safe is one that has at least 7 gauge steel construction, so this one is well above that standard requirement.

It is very hard to break with its flanged, no-pry lid. It is durable that I feel it would be useful to many for many years to come.

This one makes use of a mechanical locking mechanism, which I find more reliable than an electronic locking system.  There are more than a thousand possible combinations in this gun safe, so I bet even the most patient of thieves will give up in trying to guess the right combination.

You can make one to four key combinations in this safe. What’s even more impressive is that you short or simultaneous presses as part of your access code, which would allow you to open the safe even faster.

I can open this one in the dark in 1-2 seconds.

Enough space for my small guns

There’s no more space for mags, but that isn’t really much of concern for me. If you have a pistol, then you can place one here along with several mags.

Can be mounted vertically and horizontally

Finally, this gun safe isn’t just an ideal vehicle gun safe. It can also be a good gun safe at home because it can be mounted vertically and horizontally.

There are six pre-drilled holes in this gun safe, so there’s no need to drill holes by yourself. You’ll just have to supply the screws which isn’t really a big deal.

I initially wanted to mount it on a wall in our room, but I feared my boys would be able to stumble upon it, so I just hide it in our drawer.

How many digits are allowed?

You can key in up to four digits in your access code, although you can also use just one digit if you want to. You are not allowed to repeat digits in your code. But the safe recognizes combo digits like 5+1, meaning you push the ‘5’ and ‘1’ keys simultaneously.

Do buttons get blocked after entering the wrong code?

No, this is a purely mechanical lock.  If you keyed in the wrong code, simply turn the knob counter-clockwise to clear. It’s not an electronic mechanism that has lock-in period after an unsuccessful number of tries.

This is a  compact, handy, and easy-to-operate gun safe that I recommend to any gun owner who’s serious about keeping his weapon away from reach of the little ones, and intruders.

Unlike an electronic lock, its mechanical lock means is reliable. It quickly opens and there’s a very low chance that it will not work—something that cannot be said of electronic gun safes.

It’s also a great truck gun safe that motorists who have guns should consider getting. It is small that you should have no problems putting it under your car seat. The lack of a mechanical cable that secures it should be a very small issue.

Overall, this is one of the best compact gun safes around; something I recommend to any gun owner.

Feedback or Question? Feel free to let me know leaving a comment below!