Since the early 1940’s, the American Security Products Company (AMSEC) has been producing high-quality safes for its clients. Unlike most companies, they specialize in both domestic and commercial safes.

Due to their longevity in the business, they have continually evolved their safes and in the process improving security features on their safes.

AMSEC produces four types of locks for its safes. While the locks appear similar, each safe has a specified turning sequence for the tumblers to be activated and open the lock. Therefore, each safe will have its own procedure of unlocking.

Therefore to open an AMSEC safe, you have to; know the type of lock on the safe and the procedure of opening the specific lock by either entering the correct code on a keypad or turning a dial on a combination lock.

The following are the four types of locks used on AMSEC safes and the procedure of opening them.

These types of locks are essentially normal combination safes. They have a dial which a user uses to enter the required code for the safe to open. However, they differ from other combination locks as they have a procedure to be followed when turning the dial.

The following is the procedure for opening AMSEC Group II Combination Locks:

These types of locks are commonly found on floor safes. They are easily recognizable by their round door. To open this type of safe, follow the following procedure: 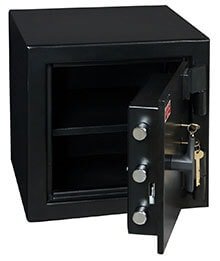 These types of lock appear similar Group II combination locks but have an added security feature as one has to insert a key into the safe and then enter the combination code.

To open the safe, first of all, set the dial to the zero position and insert a key into the provided keyhole on the lock. Turn the key anti-clockwise for a half turn and then so as to turn the lock. Afterwards, twirl the key clockwise until it stops.

Next, detach the key and input the correct combination using the same procedure for a Group two combination lock.

Combinations of these types of locks vary in length but the unlocking procedure is basically the same. Before attempting to input the combination to unlock the safe, ensure that the handle of the safe is in the fully locked position.

The following is the process of opening an electronic Combination safe:


Whenever four incorrect combinations are entered sequentially, the safe goes into a lock out mode for 15 minutes where it cannot be opened even with the right code.

Someone forget the combination for opening the safe, AMSEC does not provide a replacement code. The owner has to find a locksmith who is an expert in cracking AMSEC safes to open it for them.