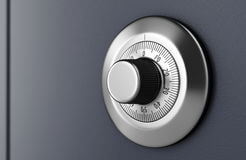 A safe is specifically designed to keep valuable items and possessions that the owner of the safe deems valuable away from unauthorized hands. Combination safes use a series of numerals that are entered in a precise sequence to lock or unlock the safe.

Traditionally, most safes use 3 number locks. However, 4 number locks exist and are also very effective.

They require four numerals to be entered on the locking mechanism for it to open. When the correct sequence is entered, the lock unlocks, and if the combination is incorrect, the safe does not open.

The following procedure describes how to open a combination safe with four numbers when you possess the right combination sequence.

If you are opening your combination safe for the first time, you need to get your correct combination code. The code is usually stored as a slip of paper inside the safe.

Since the safe comes locked after purchase, you need the safes default combination to access the inside of the safe to get the correct combination code that you will be using to open the combination safe.

Lastly, turn the fourth and last wheel on the combination safe clockwise. Turn the wheel until you reach the fourth number on the safes combination code and stop at it. Ensure that the number is centered at the top of the wheel.

Ensure that the four numbers are correctly aligned at the upper part of the four wheels. If the correct numbers have been entered, the safe is unlocked. Grab the handle on the safe and pull to open.

If the safe does not open, two reasons may be causing it not to open; either the combination code is not correct, or the numbers are not centered at the top of the wheel.

You should go back and ensure the combination code is correct and that the numbers are centered at the top of the wheels. You can then proceed to pull the handle of the safe and try to open it.